The hotly debated ban has helped to drastically bring down smoking rates among adults and teenagers alike and saved thousands from the harms of a product which kills 1 in 2 of its long-term users.

A major cultural shift has taken place over the past decade. A vast decrease in the numbers of those who smoke in the home, from 80% to 46% since the ban’s implementation, suggests a better awareness of the dangers of second-hand smoke, especially around children and families.

Chief executive of tobacco control campaign charity ASH Wales, Suzanne Cass, said: “The smoking ban has resulted in the most positive improvement in the nation’s health in decades. The significance of this legislation should not be underestimated. Thousands more children now live in a smokefree home, and hundreds of thousands of people are no longer subjected to the deadly effects of passive smoking.”

There is clear evidence smokers no longer feel as comfortable smoking around others – the number of people smoking in their own home has almost halved since the ban came into place. It is fantastic to see the message about the dangers of smoking, especially around children, is being heard.”

The hidden threat from second-hand smoke, especially for workers in the leisure industry such as pubs and clubs, was cited as one of the major reasons for bringing in the indoor smoking ban. The World Health Organisation says more than 80% of cigarette smoke is invisible and odourless, and there is no safe level of second-hand smoke exposure.

There continues to be strong support for the smoking ban in Wales, with 81% of people in support of the smokefree legislation. Notably three quarters of smokers are in favour of the ban.

Despite the huge steps forward, ASH Wales believes there are still more changes to be had. Suzanne continued; “Smoking rates have dropped for most of the population except among the unemployed where they’ve in fact increased from 41% to 43%. This shows the stop smoking message still isn’t engaging these ‘hard-to-reach’ people and the health inequalities gap between the ‘haves’ and the ‘have nots’ in Wales in increasing.” 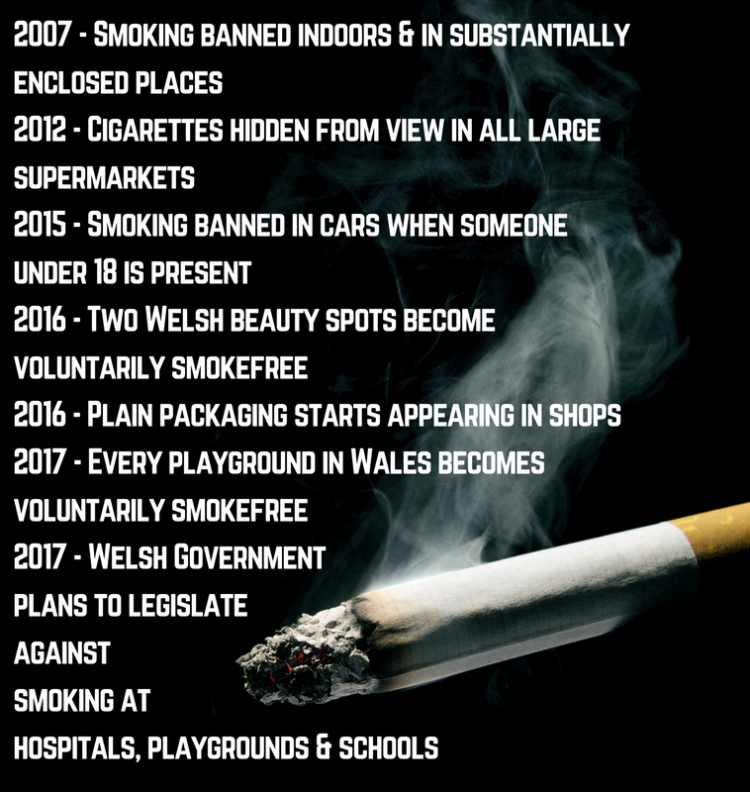