After smoking for 27 years Andrew from Cardiff decided to quit following a health scare. He replaced smoking with walking and now aims to achieve 15,000 steps every day. 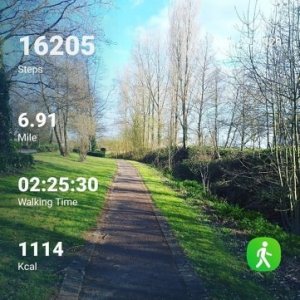 I quit smoking 7 months ago and it was the best thing I’ve ever done. I’ve now replaced smoking with walking and make sure I do a minimum of 15,000 steps a day, so it’s been a complete change of lifestyle for me.

I smoked for 27 years in total from 1992 to last November.  I had wondered whether there was any point in giving up, given how long I’d been smoking. I thought the damage was already done.

But I did lots of research and found out that even after so many years of smoking the body can repair itself and that after six months your risk from lung, mouth, throat and pancreatic cancer goes down. Your risk of developing smoking related conditions doesn’t disappear completely but it can make a real difference.

I’d decided to quit several times before using patches but never managed longer than a couple of weeks, a month at best.

Then last year I started to feel ill and had trouble swallowing my food. At that point I decided to give up smoking for good.

I saw my doctor who was very matter of fact and told me it could be the dreaded cancer then a week later I went for tests which included having a camera put down my throat. I got lucky in a way – they did find lumps, however they were benign and non-cancerous.

The lumps in my oesophagus might turn cancerous later on, who knows but hopefully not. I’m ok at the moment as I’ve got my medicine and I’m know that I’m more likely to stay healthy for longer if I don’t smoke.

At first the hardest bit about giving up was the anxiety. I was particularly concerned about the harm I’d done to my health and kept worrying about cancer.

It took about three months for this anxiety to start wearing off and what really helped was downloading a walking app and concentrating on my daily step count. That really took my mind off things.

My advice to smokers thinking of giving up would be of course to go for it. But I’d also say that it’s not easy and they have to be prepared to really work at it.

If you smoke 20 cigarettes every day for a year that causes 50 DNA mutations per lung cell minimum and there are hundreds of millions of cells in the lungs.
Smoking also changes cells in the oesophagus, stomach, pancreas and liver to name but a few.

I really wish someone had shown me some of those statistics – if they had I would have stopped years ago.  But it’s really important to remember that it’s never too late to give up. Even after 20 years of smoking some of the damage can be reversed and your body starts healing within days of stopping. So, stub that cigarette out and get active.