Fears that the rise in e-cigarette use would lead to young people thinking smoking is ‘normal’ are unfounded, according to a study of 248,324 teens carried out by researchers at Cardiff University.

Their research, published in the Tobacco Control Journal, was based on three national surveys of 13 to 15-year-olds from Wales, England and Scotland. ASH Wales, believes e-cigarettes have a crucial role to play in reducing smoking prevalence in Wales and has welcomed these latest developments.

The study funded by the National Institute for Health Research (NIHR), found young people’s attitudes towards smoking tobacco have become more negative since the emergence of e-cigarettes. Meanwhile the percentage of young people who reported having tried smoking continued to fall during the same period. 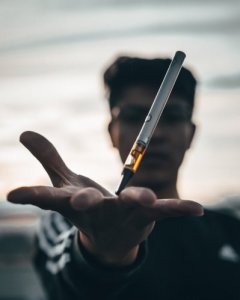 According to the research the percentage of young people who thought trying out smoking a cigarette was ‘OK’ fell from 70% in 1999 to 27% in 2015. This rate declined faster from 2011 onwards, during which time there was a surge in the numbers of people trying e-cigarettes.

Suzanne Cass is CEO of ASH Wales. She said: “Since the emergence of e-cigarettes there have been concerns they would make smoking seem ‘normal’, particularly amongst young people and this study has proved those fears unfounded.

“Thanks to this study, we now know there is no link between e-cigarettes and the so-called ‘renormalisation’ of smoking among teenagers.

“These results also show just how effective tobacco control policies and public health campaigns have been in changing young people’s attitudes towards smoking. What was once seen as a normal part of daily life and a lifestyle choice, is now perceived by many teens for what it really is – a powerful addiction that destroys lives, leading to devastating health conditions.

“We welcome the results of the study and hope this will strengthen the case for e-cigarettes to be considered a highly effective smoking cessation tool and a far safer alternative to smoking tobacco, rather than the first step to becoming a smoker.”

ASH Wales continues to campaign for policies aimed at de-normalising smoking in the eyes of young people. Successes have included the launch of a Smokefree Sports campaign, the banning of smoking at school gates across Wales and campaigns for smokefree university campuses.

The landscape in which e-cigarettes are sold and used is continually changing and ASH Wales believes there needs to be continual assessment of how this affects young people.