A campaign to stop parents from smoking on the sidelines at children’s football games, kicked off with a live broadcast from ITV Wales.

ASH Wales joined forces with the Football Association of Wales (FAW) Trust for the pilot project which will see smoking banned at Rhondda & District Football League’s mini and junior football games and at the South Wales Women’ and Girl’s League games in the Rhondda.

The project was launched at a Ton and Gelli Boys and Girls Club training session in Pentre, and ITV Wales broadcast live from the event for the ITV Wales News at Six.

Speaking at the launch, Gavin Elliott who is the RDFL’s club secretary, said he was “over the moon” that the league had been chosen for the pilot project:

“I think it’s great because I’m an ex-smoker myself and I’ve seen first hand the effects that smoking can have on a family because my father was a smoker.

“If children see smoking around them from a young age then they grow up thinking it’s an acceptable thing to do.

“When I found out about the project, I was over the moon really. It’s a fantastic for the Rhondda League that we’re going to be providing a healthy environment for the kids to play in.”

The aim of the project is to encourage parents watching the games from the sidelines not to smoke in a bid to reduce children’s exposure to second hand smoke, but also to de-normalise smoking in the eyes of youngsters. 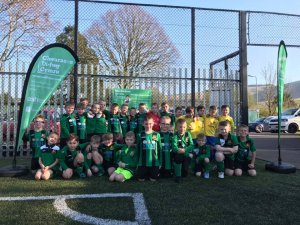 Smoking rates in the Rhondda where the launch took place are among 20% of the adult population and feedback gathered by ASH Wales shows that parents smoking on the side lines is a problem faced by many clubs.

Caroline Spanton, is Head of Football Development at the FAW Trust. She said:

“This is all about trying to create a positive environment for young people to enjoy and thrive in their sport.

“It’s critical for young people to have positive role models in their lives and parents have a huge influence on their children. If we can prevent children from seeing smoking as the norm, it could make a real difference.”

If the project is successful ASH Wales hopes to roll it out to other youth sport teams across Wales.