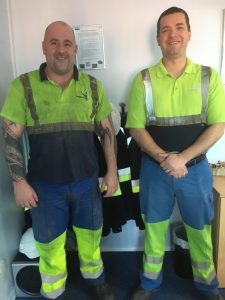 It is urging other companies to follow the example of the manufacturing firm Sandvik Osprey which holds smoking cessation sessions run by NHS Wales at its Neath Port Talbot plant.

Sheraine Thomas, who is the Safety, Health, Environment and Quality (SHEQ) Manager at the company, came up with the innovative idea of organising the sessions within the workplace, after becoming concerned about the number of workers who smoke and the effect this was having on their health.

After conducting a survey to find out whether staff would support the idea, she arranged for an NHS Wales smoking cessation advisor to hold group sessions at the company’s site in Neath Port Talbot. Every week the advisor spoke to the group about their progress, measured their carbon monoxide levels using a CO monitor and advised on nicotine replacement therapy to combat cravings.

SHEQ Manager Sheraine, now hopes to see a reduction in the amount of time workers are having to take off due to sickness exacerbated by smoking.

“Stopping smoking strengthens the immune system and I really think it will make a difference to how many people go off work ill,” she said.

“One staff member who took part said he hasn’t had to go the doctors once since he gave up smoking 12 months ago.

“Another employee who quit went on to organise setting up a squash league and asked the SHEQ team to start a weight loss club. It has made a big difference to these people’s lives.”

She said she believes the convenience of staff being able to attend sessions within the workplace and the fact they have been there to support each other’s quit attempts has been a big motivating factor for those taking part.

“The reason why I think it has been so successful is because it is here. The smoking cessation advisor came to the site and ran the sessions every week at the same time. The guys taking part have kept in touch with each other by phone and seen each other on site. One guy told us he’d wanted a fag one day but he and a friend had a chat and they motivated each other to stay on track.”

Mark Grey (pictured above left) who took part in the sessions, successfully quit and now vapes, having previously smoked 20 cigarettes a day – a habit he started at just 14-years-old.

He agrees that having the support of his colleagues helped to spur him along: “It really helped that I was with the boys every week and we kept asking each other how we were getting along and giving each other support.

“I breathed into a CO monitor every week which was really motivating. In the first week my level was 22 and by the second week it was 3. I couldn’t believe it had come down so much in just one week. I do think that more people would give up if they did this in other workplaces.”

He was first motivated to give up for the sake of his children and said that since quitting he no longer craves cigarettes and has taken up going to the gym to relax instead:

“I don’t miss smoking and these days I don’t like the smell of cigarettes at all. I don’t have any cravings and I’ve gone back to the gym so that has taken my mind off things. I just feel better in myself generally. I don’t have smoky clothes anymore and less of a cough. I feel brilliant and I’d never go back to smoking.”

Nicholas Cromwell  (pictured above right) works with Mark and gave up after smoking up to 40 cigarettes a day for 22 years from the age of 16.
He too gave up for the sake of his children and says he hasn’t looked back since:

“It was really starting to affect my health. I struggled to play with my kids and would get out of breath even climbing up the stairs. One day my daughter turned to me and said: ‘Daddy when are you going to stop smoking?’.

“I promised her I’d give it a go then on New Year’s Day I had a light bulb moment and thought, ‘that’s it, I’m going to give it a go’.”

He too gave up using a vaporiser and has taken up exercise, training at the gym, cycling with his son and ditching junk food for a healthy diet instead.

Sheraine is now gathering together the next group of quit smoking recruits for sessions due to commence on 27th February 2019.

Suzanne Cass is CEO of Action on Smoking and Health (ASH Wales). She said the success of the scheme at Sandvik Osprey demonstrates the role that employers can play in helping to cut smoking prevalence in Wales as part of their staff wellbeing programmes.

“Smoking costs Welsh businesses around £88.4 million a year and there are numerous benefits to employers of reducing the numbers of workers that smoke – from increased productivity to a greatly reduced levels of sickness absence.

“Only 3.1% of smokers in Wales accessed NHS quit smoking services in 2017/18 which falls far below the Wales Tobacco Control Action Plan target of 5%.

“By making smoking cessation services more easily accessible by providing them in the workplace, these numbers could potentially rocket – especially as our research has shown that 64% of smokers in Wales would like to quit.”