From 25-a-day smoker to marathon runner – we hear how one man transformed his life by quitting and is now celebrating one-year of being smoke-free.

“I was known as the smoking runner”, says Stuart Hignell, remembering how at the end of every race he took part in, he’d light up a cigarette.

At the height of his addiction the 49-year-old postman from Llantwit Major was smoking 25 a day, leaving him struggling for breath at the end of each run.

He says he’d convinced himself he was ‘invincible’ after surviving a major health scare in his 30s which led to him having part of his stomach removed and despite doctors telling him his condition could have been caused by smoking, he carried on regardless .

Smoking had become an integral part of his daily routine. He remembers how, as a postman, he would stop for a smoke during his round, a habit he said he thought he’d never break: “There was a specific part of my round when I pulled up in my van to wait for a colleague. That used to be my smoking break and I’d automatically pat my pockets to check that my tobacco and papers were there.”

When he found himself back in hospital a year ago however, that all changed.

“I ended up staying in hospital for a week and all that time, as I was lying in my bed, I never once thought about getting up and going out for a cigarette. I was so surprised that I hadn’t craved a fag. It was like a switch had been thrown in my head.
“I decided then and there that if I could last a week with out a fag, that was it, I was in the right mindset to give up.”

After leaving hospital, Stuart visited his GP who gave him two weeks of nicotine patches and mist. By the second week, Stuart said he no longer felt the need to use the mist and describes the whole process of quitting as ‘simple’.

“I still have my tobacco and my papers and I’ve never felt the urge to use them,” he said. “They are in a box under my table and that’s where they are going to stay.”

Despite being a smoker, Stuart had been running for three years, having rediscovered his joy of the sport which he’d enjoyed in his school days:

“I started running again three years ago. I had been nagging my brother about running with him again. At the end of each run though, I’d have a fag and i become known as the smoking runner. It was a bit of a stigma really.
“The running community was incredibly supportive when I gave up. I can push myself a lot harder now and I’m no longer fighting for breath at the end of a run.
“As a postman I walk 65 to 70 miles in an average week. Quitting smoking has definitely helped me to do that too,” he added. 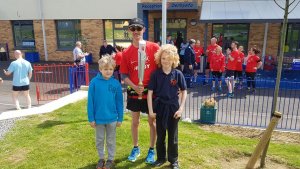 Having given up smoking Stuart has never looked back.  The father of three is now urging his own children never to take up the habit. And his advice to others hoping to do the same is simple:

“Believe in yourself. It’s a big lifestyle change and you have to be fully committed to making that change. And it’s ok to relapse, just as long as you get straight back on track.”