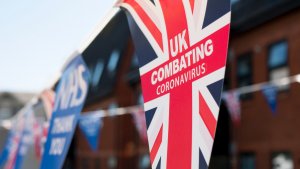 Barry, from Swansea, planned to stop smoking once he retired earlier this year. What he didn’t anticipate was having to quit as the country saw itself transition into lockdown. Thankfully with support from NHS Wales Help Me Quit, he was finally able to conquer a 47 year addiction.

I started smoking when I was 9 years old. I was the youngest in a group of friends who had already started smoking so peer pressure was a big part of it. My father and aunts and uncles also smoked so it seemed like the grown up thing to do. I began smoking more regularly when I was 14.

I decided to quit as I wanted to take early retirement and this would save about £100 per month. A friend I knew from the smoking shelter at work had a heart attack and died a day after I was talking with him and I was certain I didn’t want to go the same way.

I tried giving up initially 2 days after retiring but wasn’t ready. On the 29th March lockdown had started but I finally felt ready, so I smoked all the tobacco I had left and decided that was it.

I had been advised not to go out so it was difficult. In the first 8 weeks I put on the best part of a stone which worried doctors. I have now stabilised my weight and have begun going out on more walks. I found the help of Help Me Quit invaluable. Even during lockdown they arranged for 12 weeks of patches for me and I had weekly phone calls which were helpful and confidence boosting.

I have to admit I still miss smoking but I know I’m doing the right thing. My advice to anyone wanting to quit is to do so as soon as you are ready, the younger the better, as the health impacts creep up on you. My other tip is to save the money you would have used for cigarettes in a jar, and spend it on something meaningful for YOU, no-one else. I intend to have a great holiday next year with the money I’ve saved from stopping smoking.

Barry is 56 and worked as a civil servant for 35 years alongside a number of other jobs. He’s married with 2 grown up sons and enjoys travelling, football, swimming, reading, puzzles, gardening, walking, cinema and eating out as well as spending as much time as possible with his family.