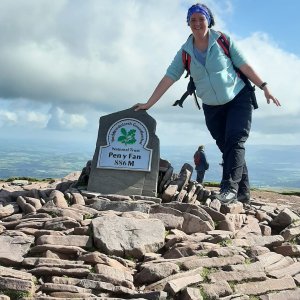 Every year in Wales around 3,000 people are diagnosed with Chronic Obstructive Pulmonary Disease (COPD), a group of lung conditions that cause breathing difficulties. Smoking is a leading cause of COPD.   To mark World COPD Day we met Tracy Cross, a 47-year-old mother of four from Cardiff, who was diagnosed with COPD after giving up smoking 6 years ago. This is her story:

I was  bullied a lot at school and after a particularly bad day someone told me that a cigarette would make me feel better, so I gave it a try.
I carried on and when I was university, I used to enjoy the social aspect of it as there would be groups of us smoking outside and we’d have something in common.

I used to smoke between 10 and 15 cigarettes a day and I’d only ever smoke outside or in the kitchen with the back door open.
Over the years I tried to stop several times using different techniques. I tried vaping but it made me feel horrible and I went back to cigarettes.

I eventually quit when I became pregnant again six years ago. That time I knew I had to quit for good. I downloaded two apps on my phone with advice on how to quit. I also thought about how I could change my daily habits.

For instance I would always smoke after having a coffee, so I change what I drank. I also changed where I was going because there were certain places where I’d always smoke.
I also developed a habit of thinking about something that tasted really bad every time I craved cigarette. Even now, six years later, I still use that technique if I have a craving.

I had a very difficult pregnancy then an emergency c-section in the end.
After I didn’t feel that I ever fully recovered from it.

I was struggling to walk up the road. I thought it was because I hadn’t lost the weight after having my baby and it didn’t occur to me that there was anything wrong with my lungs.
Eventually I went to see the doctor and even walking from the waiting room to see them made me feel out of breath.

They sent me for an x-ray just before Christmas and my son’s first birthday. They found something on the scan but didn’t know what it was yet so there was a real cloud looming over my son’s birthday. 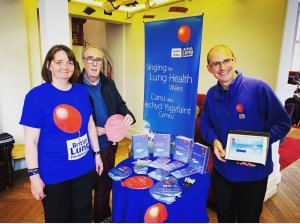 Tracy helping out at a British Lung Foundation event

In the January I found out I had COPD. I was given medication but had trouble taking it. I then found out I also had asthma.
I went on to have pulmonary rehabilitation which is when I re-discovered my love of walking.
As I was caring for my children I found it difficult taking part in exercise referrals so I joined a virtual running club and started trying to fit in exercise whenever I could.
It changed my life. I’ve gone from a size 20 to a size 14 and I’ve taken part in a 5k Race for Life, a 5K Muddy race and 10k Shine Walk. Recently I climbed up Mount Snowdon.
I still get tough days but I just have to keep going. I’ve realised that its when you stop that’s when the problems start. 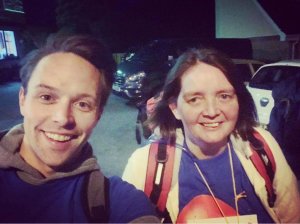 Before I was diagnosed with COPD, I didn’t know a lot about the connection between smoking and COPD. I knew more about cancer.
When you’re young you think nothing is going to happen to you and I was one of those people.
My advice to smokers would be to definitely not give up trying to quit. It’s possible, even if you have to make 6 or seven attempts to quit. Find a reason to quit and keep that reason in your mind. Figure out why you smoke and find out ways to change that.
And most of all if you keep quitting then going back to cigarettes, work out what makes you cave in and decide what to do if you start having cravings again.