Nicotine is the addictive stimulant within tobacco cigarettes and the chemical which changes your brain chemistry and habits. Nicotine will get you addicted to tobacco cigarettes however the most serious health problems are caused by other ingredients which include formaldehyde, cyanide, ammonia and tar.

Do you have a daily smoking routine?  Most smokers say they get an urge for a cigarette at particular times of the day e.g after breakfast, drinking coffee, waiting at the bus 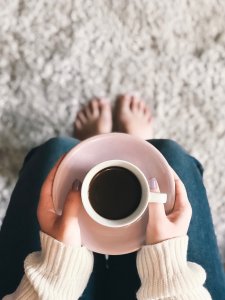 This is a result of the nicotine changing your brain chemistry, which then changes your daily routine.

When you carry out every day activities and have a cigarette your subconscious brain remembers the nicotine hit and the release of the feel-good chemical dopamine. The nicotine nudges your brain to produce dopamine and an adrenaline rush which then becomes associated with that activity. The drug and the action become interlinked without you even knowing.

Smokers often struggle when trying to quit as the nicotine hit is gone but the daily habits and rituals are still there. Alongside treating the physical cravings, we also need to address these patterns of behaviour that the unconscious brain has associated with smoking.

If you’re trying to quit – try changing your routine or finding alternative activities that don’t trigger the urge to light up a cigarette.

If you get the urge to smoke first thing in the morning you could try taking a shower immediately when you get up or make a cup of tea to keep your hands busy. Try to find an activity that both rewards and distracts the brain.

If you’re used to going out for a smoke break with colleagues, perhaps ask a non-smoking colleague if they’d like to join you for a brisk walk instead. Make sure to do this away from the smoking area and you’ll still get that reward of social time, just without the cigarette.

If you usually have a cigarette whilst out socialising, try avoiding designated smoking areas outside buildings. Tell your friends and family about your decision and ask for their support to help with the social pressure. Alcohol is a known smoking trigger, maybe try cutting back on alcohol in the first few weeks after quitting, or make sure to go out with others who can support you to stay smokefree and remind you why you decided to quit, as alcohol often effects our sense of judgement.

FALSE – Nicotine will get you addicted to tobacco cigarettes however the most serious health problems are caused by other ingredients which include formaldehyde, cyanide, ammonia and tar.

If you’ve quit smoking or are thinking about quitting take note of the times of day when your craving for a cigarette is at its highest. Once you start to take note of this behaviour it will be far easier to manage once you’ve quit. It is also important to remember that these small lifestyle changes don’t have to last forever, but alongside treating the physical addiction they will help you to control the unconscious brain and break the daily habits which tend to keep people smoking.