My name is Oliver and i am living in Cardiff for more than 2 months now.
I moved to Cardiff to do an EVS project placement.

At my project I am working with a charity called ASH Wales. The work I do there involves working with young people a lot on their project The Filter, which was one of the major reasons why I choose to apply for this EVS placement.

Luckily I am based very close to my work, in a shared accommodation with 6 other young people from different countries. Call it fortunate or whatever you want but all of them are girls, which means I am the only boy in the house. We spend a lot of time together and our relationship to each other is very good even though we’ve only known each other for 2 months. It is really interesting to see and learn how people from other countries solve daily life problems. Just to mention some fun things, in Spain for example, they use scissors for food a lot apparently. I’ve never seen this anywhere else before but Spanish people use scissors to cut bacon or pizza and plenty of more stuff and then they just put the scissors into the dishwasher. I can tell you from my own experience it is actually really useful.

Most of my time here I spent with either my housemates or some of my colleagues at work. Before I came here people from my sending organisation back in Austria kept telling me that I will most probably go through a cultural shock. However nothing like this happened to me yet, since the cultural differences are not really that big. Life here is the same as in Austria. One of the only things I noticed is that people here tend to be very polite. They say thank you for nearly anything which we in Austria would just see as natural. But apart from that I don’t see a lot of differences in living in Austria or Wales.

During my time here there was the Rugby World Cup and I can tell you that the British folks are crazy about rugby. I went to the fan zone a couple of times to watch a game there and when Wales was playing all the people went absolutely nuts. Whereas I was just standing there having no idea about rugby and the rules at all, but well it was amazing because of the atmosphere alone.  I started to play football with one of my colleagues at a near football centre. I try to play once a week but sometimes I just cannot find the time for it. 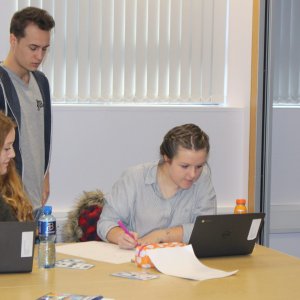