The headteacher of a school where up to two thirds of children live with somebody who smokes, has stepped in to help parents quit the habit.

Michele Thomas, head teacher of Pembroke Dock Community School, became so concerned about the numbers of parents smoking that she decided to host stop smoking sessions at the school after Hywel Dda’s Help Me Quit Team and her local community pharmacy got in touch with the idea.

They had identified Pembroke Dock as an area of high smoking prevalence but realised that it was a challenge for smokers with young children to get to smoking cessation clinics.  To solve the problem, they offered to hold sessions at the school after the morning drop off.

The project started with Public Health Wales giving lessons to the children about the dangers of smoking and the positive benefits of quitting, including having more money to spend.

And it was the news that if their parents gave up smoking, they’d save £1,000 to spend on Christmas presents that really got the children fired up about asking them to quit.

“We wanted to use pupil power,” explained Mrs Thomas.  “So, we held an assembly for the children and said if your parents or someone that you know gave up, they’d have £1,000 to spend on you for Christmas. They were all very keen in getting the people that they knew involved in giving up. And many children left that day saying, ‘I know who I’m going to be speaking to’.

The children were given a letter to take home inviting their parents to attend a smoking cessation group run by Help Me Quit. Nine parents signed up and by the end of the 6-week course 40% of them had successfully quit smoking thanks to support from community pharmacist Dave Edwards, who provided nicotine replacement therapy, and the Help Me Quit cessation advisor. 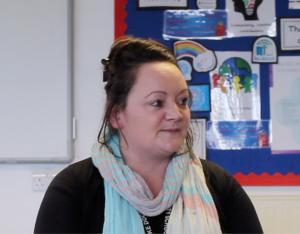 One of the parents taking part was mum of three Kristy Briggs, who also works at the school as a teaching assistant. Before attending the sessions, she smoked up to 15 cigarettes a day having started ten years ago. Since giving up she has taken up running and says the support provided by the Help Me Quit advisors was invaluable: “They were just so supportive. It was saying how proud they were of you and they made you feel really welcome.

“Every week then we’d be welcomed, we’d be made a cup of coffee, we’d sit down, we’d have a chat, they’d ask how I was getting on, and whether there were any times I’d find difficult.  They’d give us ideas on what to do.

“I started off with the inhaler and the patches and within about three weeks I decided I didn’t want the patches anymore.  And I came off it really quickly. I took up running and I did enjoy doing that. And each week as I give up smoking, I noticed I was running further, I wasn’t getting out of breath as quickly.  It was really good.”

Cath Einon, from Help Me Quit – Hospital Service,  came up with the idea of running lessons on smoking for the children before inviting the parents to take part. She said the children did an incredible job of spreading the word about the benefits of quitting smoking among the wider community:

“We encouraged them to talk to those people at home, so their care givers, their parents and their grandparents to say, ‘why don’t you come and speak to somebody’. We noticed there was a knock- on effect in the local services, so the people accessing services in the surrounding area had mentioned that the reason they had come was that their grandchildren or whoever had asked them to give up smoking. So, I think the nagging of the children on grandparents and friends and family has had a real impact on the wider community as well.”

It was the sheer number of parents at the school who smoked that prompted Mrs Thomas to organise the sessions and she admits that she’d underestimated the scale of the problem:

“I underestimated actually about the percentage of people who smoked. When I popped in to observe the lessons going on, and when they asked the children how many children had somebody in their house who smoke or in their family who smoke about two thirds of the class had their hands up. I was really quite shocked as to the high numbers.”

Having seen the success of the scheme Mrs Thomas now hopes to hold further sessions at the school and for it to be a rolling programme that parents can return to even if they fall off the wagon and start smoking again. And she says it’s not just the parents who have benefited from the project, describing it as a great learning experience for the children and one that she hopes, will stop them from taking up the habit themselves.

“It was a good educational opportunity.  They learnt all about the dangers of smoking, of passive smoking as well, they learnt about the law and also about the costs so I think it was a good learning experience and hopefully a motivator in the future for them not to take it up.”

Suzanne Cass is CEO of tobacco control group ASH Wales. She praised the innovative nature of the scheme and said more needs to be done across Wales to make stop smoking services more accessible to smokers:

“This is an excellent example of how stop smoking services can be provided within a community setting in an area of high smoking prevalence. Across Wales there is support available for smokers who want to quit, however the numbers accessing the services are low. Just 3.1% of smokers in Wales accessed NHS smoking cessation services in 2017/18, despite NHS Wales figures showing that two in three smokers in Wales want to quit.

“It is time to think outside the box and come up with new ways of bringing cessation services to the smoker. Community settings, schools and workplaces are just some examples of how this can be done, as this project has shown.”