The aim of the portrait, made of butts collected by Keep Wales Tidy, is to highlight the impact of cigarette butts on the environment and the fact that they pollute our oceans and waterways with plastic and toxins. 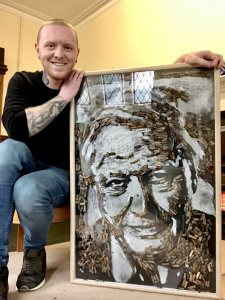 damage cigarette butts do to the environment in a bid to deter children and young people from taking up the habit.

Today Nathan, who reached the semi-finals of Britain’s Got Talent, will unveil his portrait to children from Barry Island Primary School who will be learning about cigarette litter and, depending on weather conditions, carrying out a litter pick organised by Keep Wales Tidy on Barry Island Beach.

Cigarette butts are the most littered item in the world and across the UK alone it is estimated that 122 tonnes of smoking related litter are dropped every day. In 2018 cigarette butts were found on 80.3% of streets in Wales, making it the most common form of litter in the country.

Many of the cigarette butts dropped in the street fall down drains and eventually find their way into the waterways and the sea.

Contrary to popular belief, cigarette butts are not biodegradable. They contain plastic and can stay in the environment for up to 15 years. Cigarette filters contain harmful chemical ingredients including arsenic, lead and nicotine that pollute our waterways and the toxins in tobacco residue endanger animals that ingest them.

Indeed, one cigarette butt left to soak in water for 96 hours, will release enough toxins to kill half of the salt or fresh water fish that are exposed to it.

Suzanne Cass, CEO of ASH Wales, said: “This year we want to use No Smoking Day as an opportunity to raise awareness of the environmental impact of cigarette butts and there is a very serious message behind Nathan Wyburn’s portrait.

“Through the BBC series Blue Planet, Sir David Attenborough has shown the devasting impact plastic is having on our oceans.

“Plastic filled cigarette butts are a part of that problem and play a big part in turning the seas into what Sir David Attenborough has described as a ‘toxic soup’.

“Protecting the environment is a major concern especially amongst young people. Many smokers do not know the damage cigarettes do to the planet and we hope that by making people more aware of the impact, it might give them an extra incentive to kick this highly addictive habit.”

A survey carried out by Keep Britain Tidy last year found that less than half of smokers know that cigarettes contain plastic.  Meanwhile one in ten smokers do not consider cigarette butts to be litter and 10% think cigarettes are biodegradable.

Lesley Jones, Chief Executive of Keep Wales Tidy, said: “We want to debunk the myths and misconceptions around the disposal of cigarette ends. Because of their size, many people don’t recognise cigarette ends as litter and the real damage they can cause. They are not biodegradable and are harmful to our health, wildlife and the environment.”