The people of Wales are calling for tougher measures to reduce smoking prevalence, including bans on smoking in all town centres.

Results from the latest ASH Wales Cymru YouGov survey into attitudes towards tobacco control in Wales have been published to mark World No Tobacco Day and reveal overwhelming support for new measures and outdoor smoking bans. 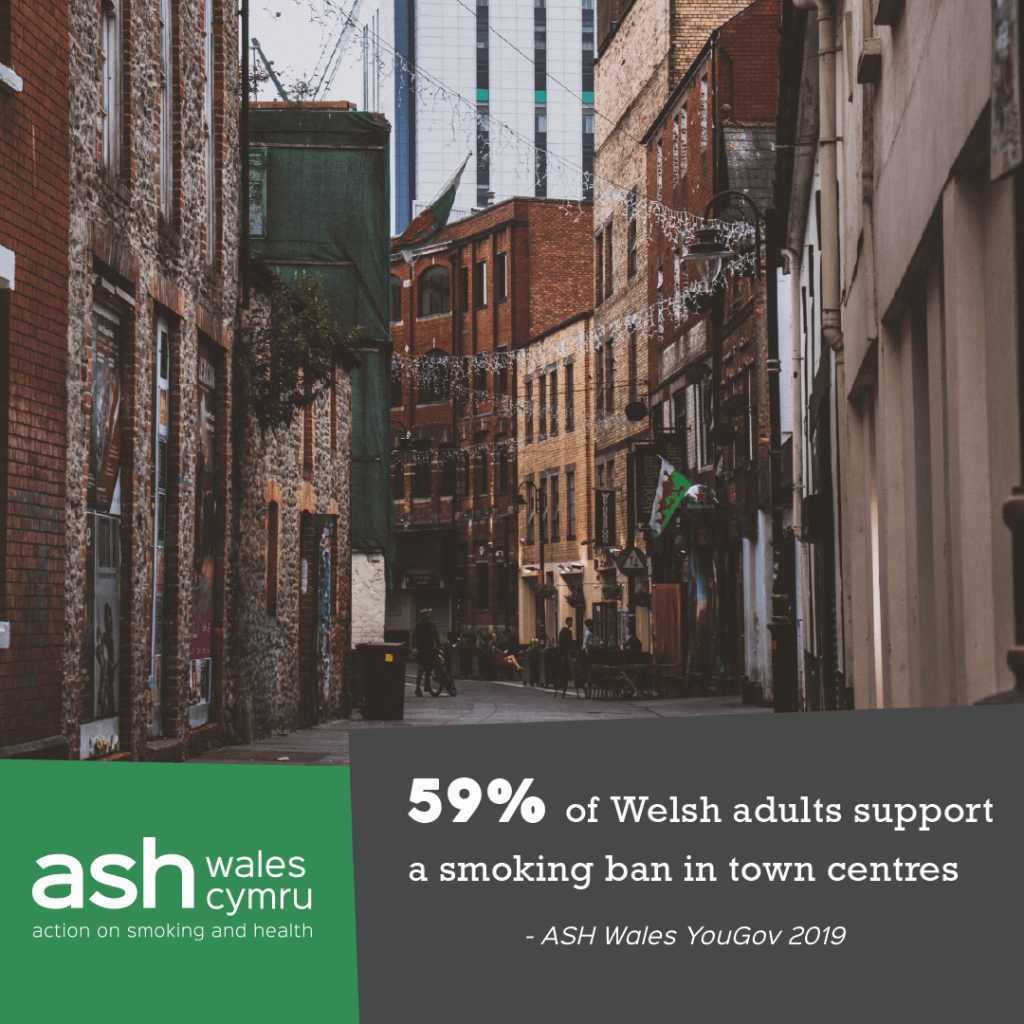 There was strong support too for measures aimed at reducing smoking among young people; 58% said they would support raising the age of sale limit for tobacco from 18 to 21. Meanwhile 83% called for businesses to be required to hold a valid licence to sell tobacco which would be removed if they were found selling to underage smokers more than once.  The survey also found 67% of Welsh adults support banning smoking from entertainment media aimed at young people.

John Griffiths AM, chairman of the Welsh Assembly’s Cross-Party Group on Smoking, said funding is needed to support smoking cessation activity in the community:

“As Chair of the Welsh Assembly’s Cross-Party Group on Smoking, I welcome the latest YouGov survey results which highlight that there is strong support for tackling smoking in Wales. The results show that nearly 70% of people would support new action to reduce smoking prevalence in Wales by 2035.

“Smoking is still the biggest cause of preventable mortality and health inequality in Wales and rates have stagnated at 19% since 2015. Community based actions at grass roots levels must have the financial support they need to effectively help people quit cigarettes for good. I look forward to continuing to work alongside ASH Cymru to further improve smoking cessation services and ensure we soon have a smoke-free Wales.”

Suzanne Cass is CEO of ASH Wales Cymru. She said the survey results prove how far the tide of public opinion has turned against smoking:

“These survey results show just how far we’ve come, from a society in which smoking was regarded as a normal part of daily life, to one where the public are demanding tougher measures to help stamp out this deadly addiction.

“Thanks to a combination of tobacco control measures and campaigns to raise awareness of the impact of smoking on people’s lives, it is gradually become de-normalised, particularly among the all-important younger generation.”

The theme of this year’s World No Tobacco Day, is the impact of tobacco on lung health. Currently smoking prevalence in Wales stands at 19% of the adult population – 476,000 adults.

There are 5,388 smoking attributable deaths annually in Wales and the cost to the Welsh NHS is £302million. Across Wales lung cancer is the most common cause of cancer deaths – there were 1,891 deaths from lung cancer in 2017 and it accounted for over one in every five cancer deaths – more than bowel and breast cancer combined.