Meet Scamp, the elite tobacco sniffer dog who is so successful that his owner claims smugglers have put a price on his head.

During his five-year career, the springer spaniel has sniffed out £6 million worth of illegal tobacco, thanks to his powerful sense of smell and natural hunting instincts.

Owner Stuart Phillips who runs B.W.Y Canine in Pembrokeshire, says Scamp’s success rate at sniffing out illegal tobacco hauls means he poses a big threat to the criminals who smuggle in and sell the goods.

“We had to stop working in one part of the country last year, because there was a £25,000 bounty put on his head,” said Stuart.

“It was believed to be linked to an organised crime group and the relevant authorities were informed. I’ve also had death threats, my windscreen has been smashed and my tyres slashed,” he added.

Stuart trains specialist detection dogs to sniff out tobacco, firearms, drugs, explosives, meat and even human remains and works with more than 100 local authorities across the UK.

He says the scale of the illegal tobacco industry is vast with products smuggled in from as far afield as China or Russia and sold from shops or homes across Wales.

“It is a massive problem in terms of the volume available and the fact that it’s so readily available in shops. It’s available on social media, through Facebook, and in Wales we have what are generally called fag houses, people selling from their houses. Some of these people have been selling from their houses for years. They’re known throughout their communities for selling cheap cigarettes and cheap hand rolling tobacco.”

The cigarettes are sold at what Stuart describes as ‘pocket money prices’ making them readily available to children and to smokers who would not otherwise be able to afford them.
Even more disturbing however is their link to serious organised crime, with those buying illegal cigarettes often unwittingly funding the activities of organised crime groups.

In a special report by BBC Wales earlier this month, Trading Standards officers called for a government taskforce to tackle the problem, warning that criminals selling illicit tobacco target Wales due to a lack of investment in enforcement. New figures show that since 2013 150,000 illegal tobacco products have been seized in Wales.

Stuart whose dog YoYo has sniffed out £4.5 million worth of tobacco since he began work in 2014 is now training the next generation of sniffer dogs, using his tried and tested methods. 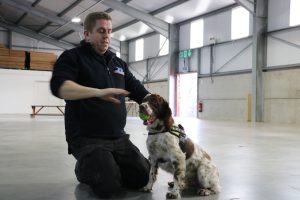 “Spaniels are especially good at being sniffer dogs because they have traditionally been used for hunting,” said Stuart.

“Their natural instinct is to sniff out birds and rabbits. Some days we could be searching five or six shops with each search taking around 25 minutes. We need dogs that are capable of doing that work day in, day out. These dogs are made to work, they are not made to sit around on a sofa all day.

Stuart trains the dogs to use their sense of smell starting off with games of fetch using a rubber toy. The next stage of the training is Odour ID Testing where the whole toy is hidden in one of a row of metal containers. The dog has to find the one that contains the toy and learn to give the handler an indication that it has found it. After that the dog must find increasingly small fragments of rubber from the toy and learn not to be distracted by decoy objects. It then progresses to sniffing out cigarettes.

An experienced dog like Scamp can find the tiniest fragment of rubber and everything from a single cigarette to a whole pallet load. He has also been trained to sniff out bank notes and has uncovered wads of cash worth up to £60,000.

He is the best weapon the authorities have in the war against illegal tobacco – a war Stuart says the authorities are a long way from winning: “My work load is huge. There’s not enough days in the week because it’s a massive problem,” he said.

A survey carried out by ASH Wales in 2014 revealed that up to 15% of all tobacco sold in Wales – around 1 million cigarettes a day – is illegal, the highest level in the UK. Meanwhile 45% of all smokers in Wales have been offered illegal tobacco and 70% of buyers agreed that it allows them to smoke when they can’t afford it.