Scamp, Wales’ top sniffer dog, has uncovered a stash of hidden illegal tobacco in Powys during a crackdown by Trading Standards officers. 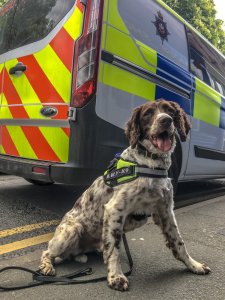 Earlier this year ASH Wales reported on how  Scamp is so successful at sniffing out illegal tobacco that he has had a £25,000 bounty put on his head by an organised criminal gang.

Illegal tobacco remains a major problem in Wales, making up 15% of all tobacco sales in the country and undermining tobacco control policies aimed at reducing the number of those that smoke. There are fears too that the trade in illegal tobacco could be funding organised crime both here in Wales and throughout the United Kingdom

Cllr James Evans, Cabinet Member for Trading Standards, said: “Combating the supply of counterfeit and illegal tobacco is one of our ongoing priorities of our Trading Standards Service. We are looking to increase the understanding of the impact it has amongst smokers and local communities when shadow activities occur with illicit products.

“Operations of this nature, should also serve as a warning to those involved in the supply and sale of illegal tobacco that we will take the appropriate action with partners that is necessary to combat this problem.”

Clive Jones, the council’s Professional Lead for Trading Standards, Community Safety and Emergency Planning added: “This illegal trade harms legitimate traders in Powys and wider afield. Over the past two years we have seized nearly 60,000 illegal cigarettes and 60kg of illegal tobacco as part of our overarching operation on illicit products, named Operation Date. Investigations are ongoing.

“The supply of illegal tobacco bypasses government tobacco control measures, such as not selling tobacco to children and availability of illegal tobacco is increasing. This makes it more likely that youngsters will start smoking and we find that counterfeit products often contain high levels of heavy metals such as cadmium.

“Our surveillance on illegal activity involving counterfeit products of any variety is increasing and we ask users or any person offered suspected counterfeit goods to be vigilant and to warn us of any suspicious sellers through our contact points. Alternatively ring Crimestoppers on 0800 555 111.

Suzanne Cass, Chief Executive Officer of ASH Wales, said: “We applaud the efforts of all those involved in operations of this nature and hope this sends a message to others that this activity will not be tolerated.

“Illegal tobacco currently makes up 15 per cent of all tobacco sales in Wales – the highest level in the UK – and continues to undermine efforts to tackle smoking prevalence. Criminals sell illegal tobacco at pocket money prices to those who would not otherwise be able to afford it, disregarding all tobacco control measures.

It represents a major threat to the health of the nation greatly increasing the numbers of those at risk of developing smoking related conditions, which currently contribute to 5,388 deaths and 26,489 hospital admissions a year in Wales.

“It is a crime that threatens lives across Wales and resources must be directed towards helping to stamp it out.